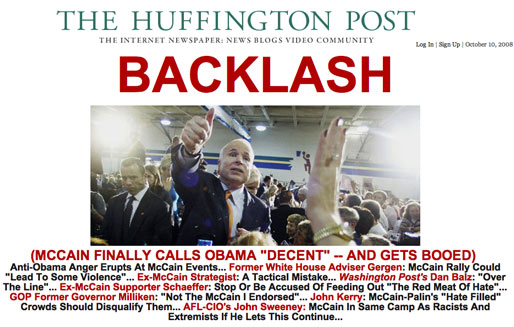 And he’s not the only one.

On Friday, John McCain had to come to grips with the hate that hate produced. After several days of full frontal negative assaults on Barack Obama’s character, and the resulting bitterness and belligerence they instilled in his supporters, McCain said at a townhall meeting that Barack Obama was, after all, a decent man. What did that get for McCain? Boos.

This was a great piece of political theater for news junkies. But it leaves a big, unanswered question: where does McCain go from here?

Let’s step back and look at what led to this. The tone and tenor of the campaign got noticeably nastier when the McCain campaign said earlier this week that it was going “to get tough” with Obama. As the Washington Post reported:

Sen. John McCain and his Republican allies are readying a newly aggressive assault on Sen. Barack Obama’s character, believing that to win in November they must shift the conversation back to questions about the Democrat’s judgment, honesty and personal associations, several top Republicans said.

With just a month to go until Election Day, McCain’s team has decided that its emphasis on the senator’s biography as a war hero, experienced lawmaker and straight-talking maverick is insufficient to close a growing gap with Obama.

“We’re going to get a little tougher,” a senior Republican operative said, indicating that a fresh batch of television ads is coming. “We’ve got to question this guy’s associations. Very soon. There’s no question that we have to change the subject here,” said the operative, who was not authorized to discuss strategy and spoke on the condition of anonymity.

McCain’s only positive commercial, called “Original Mavericks,” has largely been taken off the air, according to Evan Tracey of the Campaign Media Analysis Group, which tracks political ads.

The barrage started with Sarah Palin accusing Obama of “palling around with terrorists.” She was referring to Obama’s association with William Ayers, a founder of the Weather Underground in the 1960s, who is now a professor of education at the University of Illinois in Chicago.

Concerning Palin’s charge, the Associated Press reported that “while Ayers and Obama are acquainted, the charge that they ‘pal around’ is a stretch of any reading of the public record. And it’s simply wrong to suggest that they were associated while Ayers was committing terrorist acts. Obama was 8 years old at the time the Weather Underground claimed credit for numerous bombings and was blamed for a pipe bomb that killed a San Francisco policeman.” But of course, Palin’s comments were never about the truth.

Even John McCain’s wife, Cindy McCain, got in the act, making a charge that is the ultimate example of the pot calling the kettle black:

Her comments came as the McCain campaign’s tone has become increasingly harsh.

Nearly every TV ad McCain ran last week was negative, compared to just 34 percent of those by Obama, according to an analysis by the Wisconsin Advertising Project released on Wednesday.

The stream of attacks worked well-too well-among McCain/Palin supporters. Reporters at various McCain events started to notice an extremely negative, harsh, even violent tone. The Associated Press reported from a Minnesota event that

A sense of grievance spilling into rage has gripped some GOP events this week as McCain supporters see his presidential campaign lag against Obama. Some in the audience are making it personal, against the Democrat. Shouts of “traitor,” “terrorist,” “treason,” “liar,” and even “off with his head” have rung from the crowd at McCain and Sarah Palin rallies, and gone unchallenged by them.

The news cycle for the week became overrun with stories of belligerence and hate at McCain rallies, as shown by the graphic at the top from the Huffington Post on Friday evening (October 10th). And that included denouncements of the tactics from several Republicans.

Even worse for the McCain campaign, the “get tough” approach did nothing for McCain’s poll numbers. By the end of the week, McCain had gained no ground on Obama. The early impression is, the public just isn’t buying what McCain and Palin are trying to sell. (See EDIT below.)

And perhaps McCain finally got sick of it too. His comments defending Obama’s decency in the video clip seem honest and heartfelt.

But sometimes, things are not what they seem. Some cynics/skeptics (like me) wonder if this was just a politically-correct course correction by McCain that is intended to connive independents into believing that that he’s not really a grumpy old man. After all, what could be more heroic than John McCain showing his honorable side by defending “that one” from mean and nasty attacks by his hardcore supporters?

But even if McCain was sincere, we must ask: was this just a brief, shining moment of civility, or, does it signal a shift in tactics?

If McCain says this today, and Palin follows that with even harsher “pals with terrorists” rhetoric tomorrow, then nothing has changed.

One thing is certain: all of this has meant another lost week for McCain. His lackluster debate performance, the negative press from the recent campaign rallies, and now Palin’s “abuse of power” rebuke from the Alaska legislature, don’t make the next 25 days before the election any easier.

Despite the comments he made to the crowd, it looks to me that personal attacks on Obama are the only weapons the McCain camp has left in the arsenal. If something else was working, they’d be doing it.

Can things get any uglier than they are now? Just watch.

—
EDIT: Polling done by ABC News indicates that “Registered voters by a broad margin now believe John McCain is more focused on attacking his opponent than on addressing the issues in the 2008 presidential election.” Here are the numbers:

It’s questionable as to whether people are less likely to vote for McCain because he’s attacking Obama rather than focusing on the issues. We know that negative campaigning does work. But my guess is that at a time when voters are worried about the economy, they want to hear a discussion of the issues, not smears and vitriol.