Skip to content
HomeThe Kings, Queens, and Martyrs of the Civil Rights Movement

The Rev. Dr. Martin Luther King, Jr. is my hero. His leadership, intellect, courage, and ambassadorship to white America and the world at large make him deserving of all the recognitions and honors that he’s received.

Yet, I am filled with ambivalence every time we come to another MLK Jr Day. Yes, Dr. King was a great man. But he was not an army of one.

For example, my other “favorite” super-hero from the Movement is Mississippi’s Fannie Lou Hamer. She started

working in the fields when she was six, and was only educated through the sixth grade. She married in 1942, and adopted two children. She went to work on the plantation where her husband drove a tractor, first as a field worker and then as the plantation’s timekeeper. She also attended meetings of the Regional Council of Negro Leadership, where speakers addressed self-help, civil rights, and voting rights.

In 1962, Fannie Lou Hamer volunteered to work with the Student Nonviolent Coordinating Committee (SNCC) registering black voters in the South. She and the rest of her family lost their jobs for her involvement, and SNCC hired her as a field secretary. She was able to register to vote for the first time in her life in 1963, and then taught others what they’d need to know to pass the then-required literacy test. In her organizing work, she often led the activists in singing Christian hymns about freedom: “This Little Light of Mine” and others.

She helped organize the 1964 “Freedom Summer” in Mississippi, a campaign sponsored by SNCC, Southern Christian Leadership Conference (SCLC), the Congress of Racial Equality (CORE), and the NAACP.

In 1963, after being charged with disorderly conduct for refusing to go along with a restaurant’s “whites only” policy, Hamer was beaten so badly in jail, and refused medical treatment, that she was permanently disabled.

In 1972 the Mississippi House of Representatives passed a resolution honoring her national and state activism, by a vote of 116 to 0. This was an extraordinary recognition, given the state’s resistance to integration. Hamer died in Mississippi in 1977. 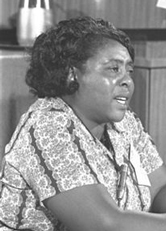 To me, no understanding of the Movement can be complete without knowing her story. But as I talk to people about Civil Rights history, especially young people, I am saddened that they have little or no idea of who she was or what she accomplished.

There are many books out there on the subject of the Civil rights Movement, but I highly recommend the following for those with a budding interest in the subject. Breach of Peace: Portraits of the 1961 Mississippi Freedom Riders by Eric Etheridge is a homage to the Freedom Riders of 1961. That year, several hundred people—blacks and whites, men and women—came to Jackson, Mississippi, by bus to challenge state laws that segregated bus and train stations.

Over 300 Freedom Riders were arrested and convicted of the charge “breach of the peace.” The book features mug shots of the arrested Riders, alongside contemporary portraits, plus text that tells the stories of the Riders’ involvement. The book is beautiful and inspirational, and highly recommended.

A blog about the book is here.

A more somber note is struck by the book Free At Last: A History of the Civil Rights Movement and Those Who Died in the Struggle, by Sara Bullard of the Southern Poverty Law Center. While the book includes a history of African Americans leading up to the Civil Rights era, its main focus is its accounts of 40 people who lost their lives during the struggle. Some of these persons are well-known (Medger Evers; Chaney, Goodman and Schwerner), and some not. But all are deserving of our recognition, and ultimately, our thanks for their sacrifice.