Statistics from the Department of Justice indicate that black males are incarcerated – held in prison or jail – at a rate that is over 6 times higher than that for white males.

The Bureau of Justice Statistics report that’s cited above can be obtained here. If you want to go straight to the PDF version of the report, it’s here.

What explains these numbers? It’s a combination of things: African Americans commit more crimes; they commit more crimes that are likely to result in jail time (as a result of sentencing guidelines that, for example, result in more jail time for crack cocaine than cocaine powder); they are less able to afford high quality legal services; and they may be subject to discrimination in prosecution, the rendering of verdicts, and sentencing.

I will try to look at these issues in future posts.

A list with the count of African Americans in each state legislature is at the web site for the Conference of State Legislatures. I have prepared this edited version of the list:

END_OF_DOCUMENT_TOKEN_TO_BE_REPLACED 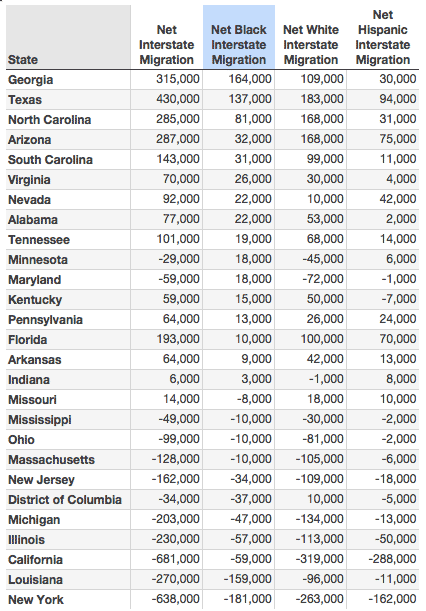 Source: Pew Research Center: COMINGS & GOINGS: Migration Flows in the U.S.
Note: This does not show numbers for Asian Americans or Native Americans.

There’s lots of interesting stuff here. The biggest black population gains are in Georgia, Texas, and the Southeast. The biggest losses are in New York, Louisiana, California, and the industrial Midwest. Here are a few comments.

• Georgia continues to be the biggest magnet for black migrators. The Atlanta area has been growing by leaps and bounds, and now sends three African Americans to the US Congress.

The influx of blacks could have political implications on a state-wide level. Last November, many were surprised when Barack Obama got 47% of the state’s vote in the presidential election, despite not doing much in the way of campaigning or advertising. Georgia is close to being 30% black, and the black folks here – especially in the Atlanta area – are politically active.

Georgia is not an unlikely place for a black governor or senator, if the right person comes along. Twelve-year Attorney General Thurbert Baker, who is African American, has announced that he’s in the race for governor’s seat in 2010. I don’t know if he’s the right person, but he is in it at least.

• The huge black migrations to Texas and from Louisiana are the result of the same thing: Hurricane Katrina. Katrina depopulated huge swaths of the New Orleans area, and many former residents moved to Houston, Dallas/Ft Worth, and eastern Texas.

The large population loss in Louisiana will probably mean that the state will lose a congressional seat following the 2010 Census. There have already been discussions about how to handle the state’s majority black congressional district, which is centered around New Orleans. That area was represented for years by former congressman William Jefferson. The current congressman there is Republican Anh “Joseph” Cao, who is first Vietnamese-American to be elected to Congress.

Some have suggested creating a new district that will combine the black neighborhoods of New Orleans and Baton Rouge. That would preserve a black majority district, but it would remove Democrats from surrounding districts, and make it easier for Republicans to win the state’s other congressional seats.

END_OF_DOCUMENT_TOKEN_TO_BE_REPLACED

When multiracial persons are included, the count of African Americans comes to 40,744,132, which is 13.5% of the population.

85% of African Americans (not including multiracial persons) reside in just 18 states, all of which have at least a million black residents:

This table shows the change in the share of African American residents for the million person states since 2000: 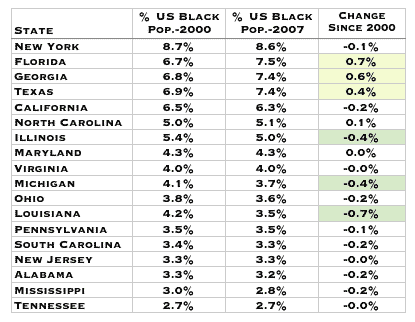 The black reverse migration phenomenon we hear about is not so much a move from the north to the south, but rather a move to Florida, Georgia, and Texas from just about everywhere else, at least in this decade. Those three states have a higher share of the black population than they had in 2000.

Illinois, Michigan and Louisiana (thanks to Hurricane Katrina) have lost the most “black share,” but several southern states (Alabama, Mississippi, and South Carolina) have lost share as well.