The much watched Atlanta mayoral race is not over yet. Mayoral candidates Mary Norwood and Kasim Reed will go head to head in a run-off election on December 1, after neither gained the 50% of the vote needed to win the election outright on November 3rd.

Norwood, an at-large member of the Atlanta city council, got 45% of the vote. Reed, who is a Georgia state senator, came in second place with 38% of the vote. Atlanta City Council President Lisa Borders was third with 14% of the vote in an eight person race.

This election has become notable because of the racial dynamics involved. Norwood is white, and if she wins, she will be the first white mayor of Atlanta in 36 years. The city is roughly 56% African American, 36% white, and 5% Hispanic. Although race is the 800 pound gorilla in the room, Norwood is popular throughout many parts of the city, and is seen as having a good chance of winning the run-off. 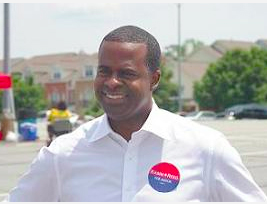 In the November 3rd election, Norwood did very well in the white areas of Atlanta, and had some pockets of black support throughout the city as well. Reed did well in southwest Atlanta and in predominantly black areas of northwest and west Atlanta.

The big questions going into the runoff are, who will the supporters of 3rd place finisher Lisa Borders vote for? And, how many people will come out to vote in December? As reported by the Atlanta Journal Constitution,

Low turnout would probably be least favorable to Reed.

The mayoral race in Houston, Texas, has also resulted in a run-off election, to be held on December 12.

Several of the candidates in Houston’s November mayoral election: Gene Locke, Roy Morales, Annise Parker, and Peter Brown. Locke and Parker will be in the December run-off election.

Parker and Locke received 31% and 26% of the vote, respectively, and are headed to the runoff.

If Locke wins, he will be Houston’s second African American mayor. If Parker wins, she will be the city’s first openly gay mayor, and the first such mayor of as large a city as Houston.

Above: a Greyhound bus with 14 members of an interracial group that was part of the Freedom Ride was firebombed on May 14, 1961, outside Anniston, Ala.

The High Museum of Art in Atlanta has opened an exhibit that brings to light many new images of the civil rights movement, along with the struggles of the photographers who made them. The show is titled “Road to Freedom: Photographs of the Civil Rights Movement 1956-1968.”

The exhibit is discussed here in an article in the New York Times.

There is also a link to a slideshow of pictures from the exhibit, called the Unseen Movement, which includes the photograph shown above.