OK, is this Phony or For Real?

Boss Nigger is the last of a trilogy of films featuring the character “Nigger Charley,” a runaway slave played by Williamson. Character actor D’urville Martin also appeared in all three films as Amos, a fellow ex-slave and comic sidekick. After killing a brutal slave master on his plantation, Charley heads to the Old West to live as a free man.

The first film of the trilogy, The Legend of Nigger Charley, was released in 1972, at the start of the blaxploitation craze. According to Wikipedia, Legend was one of Paramount Studio’s highest-grossing movies of 1972. The second movie in the series was The Soul of Nigger Charley. 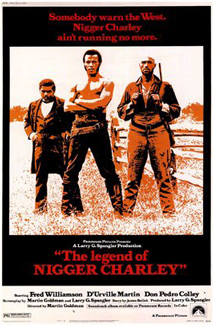 Movie poster for The Legend of Nigger Charley

In Boss Nigger, Charley and Amos are bounty hunters who come upon a small town in need of a sheriff. The town is also having a problem with a band of outlaws led by Jed Clayton, a villain who’s wronged Charley in the past. After a number of events, including the death of a young black woman at the hands of white murderers, there’s a showdown that features the death of the bad guy in slow-motion glory.

The dialogue in the trailer seems silly, and that was partly intentional. The Nigger movies were a parody of classic and not-so-classic Westerns, but also, they were typical 1970s blaxploitation fare, rife with comical put-downs of stereotypical white characters.

The word “nigger” is used freely, for both its shock value and just as important, its mock value. In this context, the word is used to make fun of both white folk’s use of the word, but black folks’ use of the word too.

But when looked at through the prism of today’s values, the use of what is now called the N word is either absurdly funny or outrageously offensive, depending on your mindset. It was movies like these that led to a backlash against the N word-it would be politically impossible to make this kind of movie today. (There are actually videos on the Internet featuring Obama that use the Boss Nigger theme song, and I thought, for one-tenth of a second, about putting it on this blog entry. But the idea was just too radioactive for me.)